Burke came into the contest primarily focussed on the Apollon’s Axle Double Overhand Deadlift—he wanted to break his own world record, and after making 160, 185 and 220 kg, he jumped to 237.5 kg for a good lift.  Burke was unhappy with the way the lift felt so (reminiscent of a Ken Leistner story), he wanted to take it over—this time, he couldn’t quite finish the lift, but no matter, he had broken the world record again. 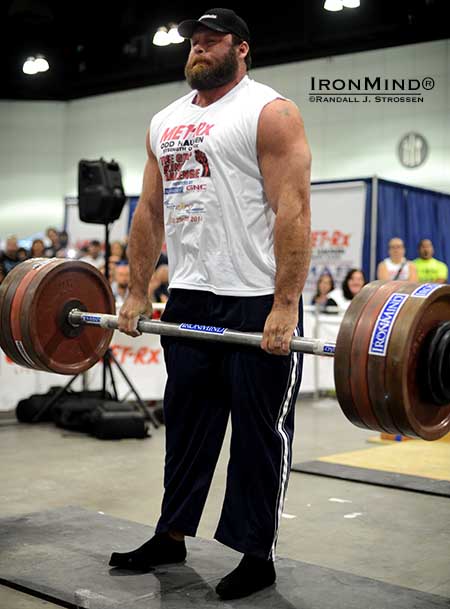 237.5 kg on the bar and Mike Burke pulled it the distance to break his own world record on the Apollon’s Axle Double Overhand Deadlift.  IronMind® | Randall J. Strossen photo

Amy Wattles booted the women’s world record on the Captains of Crush Silver Bullet into orbit: she came into the contest holding the world record at 30.05 seconds and she catapulted that to a whopping 45.42 seconds.

The Rolling Thunder included Alexey Tyukalov and Mark Felix going head-to-head in a matchup featuring the current and the immediately prior world record holder: both succeeded with 123 kg (270 lb.), but neither one could complete 128 kg (281 lb.).  Burke, who had sat out this event (because he thought both Tyukalov and Felix were going to post huge lifts and to conserve energy for the Apollon’s Axle), then walked over and lifted the 128 kg!

An Odd Haugen classic, the Viking Fishing Pole/Wrist Roller was a showdown between Mike Burke, Alexey Tyukalov and Mark Felix—they were the only competitors to raise all five fish and they finished in that order, with MIke Burke showing, once again, that if you’re looking for the world’s strongest guy from the elbow to the fingertips, put Mike Burke at the top of your list.

Alexey Tyukalov took top honors, overall, in the men’s grip contest, with Mark Felix second and Mike Burke third—with Burke, having skipped the Rolling Thunder, probably thinking “could of, would of, should of .“

Watch for a full report in MILO. 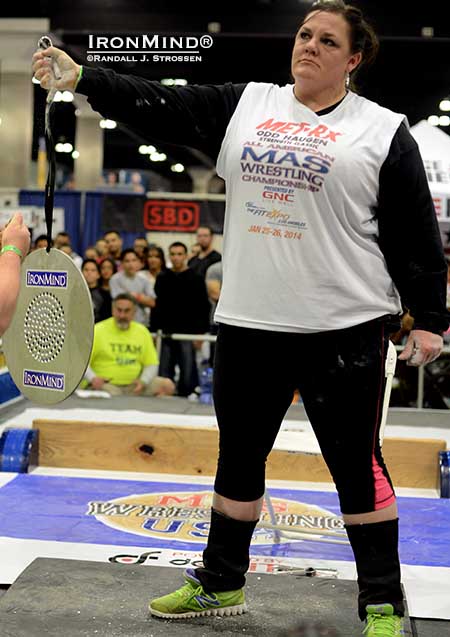 Amy Wattles hung on for over 45 seconds before the Captains of Crush No. 2 gripper opened and the Silver Bullet went airborne.  IronMind® | Randall J. Strossen photo