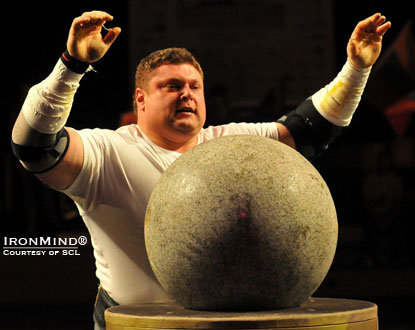 
Jean-Francois Caron took a second place again, and local hero Agris Kazelniks was on his best finish of the whole year in his hometown with a third place.

“Zydrunas won it pretty easily; he was in very good shape.  The field behind him to sixth was a real battle, as you can see in the final results.

“Ervin Katona disappointed in the end, because after each event he dropped 1 place, from second place to seventh place.  He told us that unfortunately his battery went totally empty on this important competition day.

I”t was a great ambiance in the Riga Arena, the biggest ice hockey arena in Latvia.  Around 4000 spectators saw a great show with Raimond Bergmanis coming down from the roof flown on a cable in the opening show.  Together with fireworks, dancers and big drums, a great opening, perfectly done thanks to our SCL co-organizer, the Latvian organization, with Raimonds Bergmanis as the special guest.

“The grand finale of the Monster Milk Strongman Champions League will be on 17 December in Kiev.

“Also, there will be double ranking points earned and still Zydrunas or Ervin can win the SCL World title 2011," Mostert said.