Columbus, Ohio - It's not often that you have a chance to see world champion weightlifters in the United States, but come to the Arnold this weekend and that's one of many attractions: Zhang Jie and and Lu Changliang will be lifting on the EXPO stage at 1:00 on Sunday afternoon. 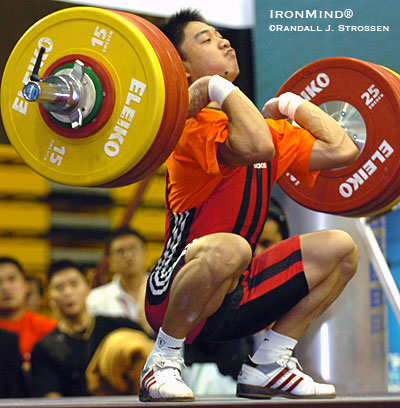 Zhang Jie (above), shown cleaning 163 kg at the 2005 Asian Weightlifting Championships (Dubai, United Arab Emirates), and his teammate Lu Changliang (below), shown working on a 196-kg clean and jerk at the 2005 Junior World Championships (Busan, Korea), will be lifting in an invitational weightlifting exhibition on the Expo stage at the Arnold on Sunday at 1:00. IronMind® | Randall J. Strossen photos. 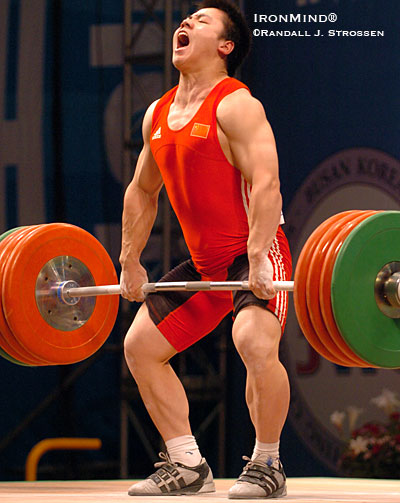 It's become a tradition, IronMind and the Arnold teaming up to bring in some of the world's top weightlifters, and the special friendship between the Chinese Weightlifting Association and the Arnold is giving everyone in Columbus an appetizer straight from the banquet Beijing will serve at this summer's Olympic Games.

And speaking of top American weightlifters, this exhibition complements the USAW Nationals being run by the Columbus Weightlifting Club all weekend - you can't miss the warm-up area when you come down the main escalator into the Greater Columbus Convention Center, and don't be surprised to see the featured international lifters training and milling around with the American lifters, who are competing for national honors in a meet that is doing double duty as a secondary Olympic Team Qualifying Event. Megan Tornstrom DeFourny, USAW Nationals Meet Director, told IronMind® that the USAW Nationals "should be the best ever. There should be some very close battles." Tornstrom DeFourny is also looking for record numbers, saying that she expects approximately 170 lifters to compete.