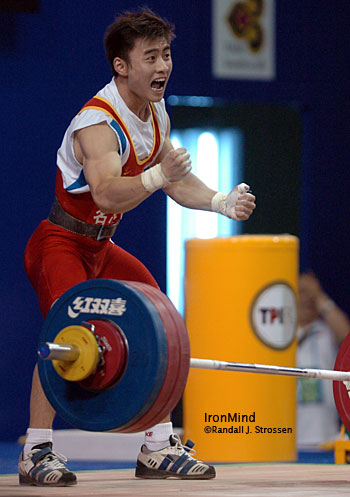 Yang Fan (China) celebrates his successful 173-kg clean and jerk. It was the last attempt of the class and it gave Yang all three gold medals in the 62-kg category at the World Weightlifting Championships today. IronMind® | Randall J. Strossen, Ph.D. photo.

Qui Le (China) was the potential tie-breaker, but he went out in the snatches - the defending world champion missed his second snatch, 141 kg, as it went up and over, and he held his arm as if he had hurt it, but then walked off without showing any visible after effects. He repeated, and was not so fortunate, as he missed again, but this time he dislocated his arm. This put him out of the contest, but when Dr. Ashgar Shahabi reset the arm backstage, it extended his world record in the procedure, giving him a total of 25.

Yang made 142 on his second attempt, for gold medal position, and Im answered with the same weight on his third. Yang missed 144 on his third attempt.

Yang opened with 169 kg in the clean and jerk, making a solid lift with a very deliberate recovery from his wide jerk. Im, who was second in the jerk and the total at this point, went for the gold medal position with 172 kg on his second attempt, but he missed the jerk. Yang followed with 172, rolling the bar to the very back of the platform as he got set up. He made another very good lift, extending his lead.

Im called for 173, going for the gold medals in the clean and jerk, and the total, and after his second attempt, it didn't seem likely that he would make it, but after making a strong clean, he punched the bar overhead. Yang had one more shot at regaining gold medal position, and he made a good lift with 173, using a very wide and deep split in the jerk, so he pocketed all three gold medals in the class. Ivaylo Filev (Bulgaria) got all three of the bronze medals, via 138/163.