Universal Studios—World’s Strongest Man fans watching the qualifying round action were treated to another world record today as Vytautas Lalas (Lithuania) set the new high water mark in the Squat for reps. 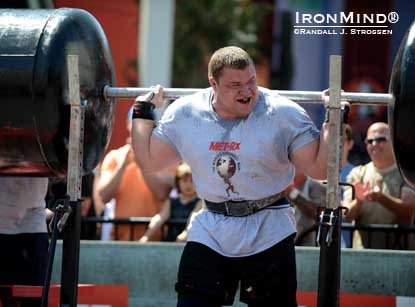 Usually stoic, Vytautas Lalas broke into a smile as he completed his successful attack on the squat at the World’s Strongest Man contest today.  IronMind® | Randall J. Strossen photo.


Squatting with an extra-long, two-inch diameter, non-revolving bar fitted with massive globes on the ends, for a total weight of 700 lb., the competitors banged away for as many reps as possible within the time limit.

So demanding was the task that some found it impossible, or nearly so, to complete the lift, but most managed a few reps and a handful pushed into upper single digits or just beyond.  As dramatic as the competition was, the  best was saved for last as the final competitor, Vytautas Lalas pushed the standard to new heights as he broke the world record with 11 reps.

IMG Executive Vice President Barry Frank—the man who created the World's Strongest Man contest in 1977—was on hand once again to enjoy the competition and he commented on its evolution: ". . . Remarkable change over the years.  Each time I watch it I am amazed at how much stronger the men have become."  Frank noted that "35 years is a pretty good run in this business," and spoke optimistically about the next 35.

Continuing the theme of man against masses of metal, the Car Deadlift, also for reps, followed the squat and also once again, the event was filled with spirited performances as the competitors continued in the third day of the qualifying rounds in the 2012 World's Strongest Man contest. 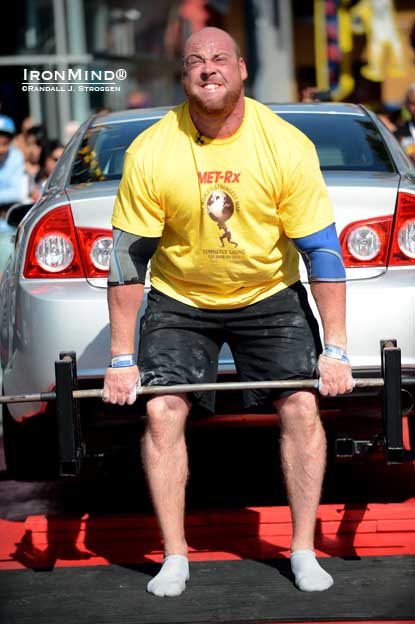