Think your are World’s Strongest Man material and just need a chance to prove it? 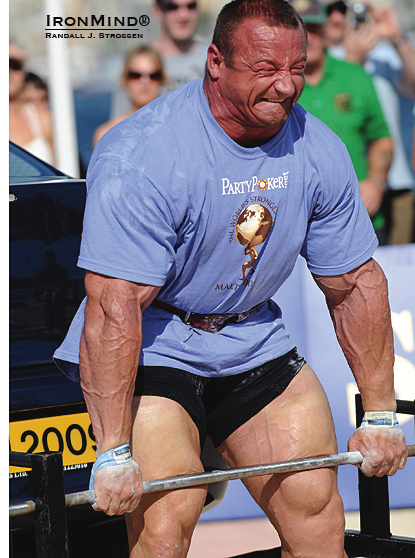 If you’re the next Mariusz Pudzianowski and only need a chance to prove, you can strut your stuff in London on March 19 - 20, and if you are the real deal you will be on your way to World’s Strongest Man 2011.  IronMind® | Randall J. Strossen photo.


Then here you go because March 19 - 20 Giants Live, the official qualifying tour for the World’s Strongest Man contest, is coming to London’s Excel Arena and here’s the kicker: Saturday is an open qualifier, so if you’ve got what it takes, you can be on your way to World’s Strongest Man 2011.

So, could someone rocket from nowhere to land a World’s Strongest Man invitation this way?  Absolutely, and Bryce walked through how it could happen.

“Come in the top three on Saturday,” said Bryce, “against other top amateurs, and you will get a shot at Derek, Brian and the world’s best on Sunday.  A competitor is therefore just two good days away from a ticket to the World’s Strongest Man contest!

“If competitors want to take part then get in touch through the website,” Bryce said.