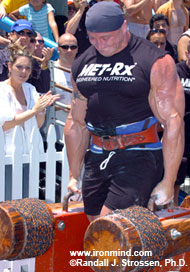 This was the first year of the World's Strongest Man Super Series, and it was extremely popular with the competitors and the fans alike.