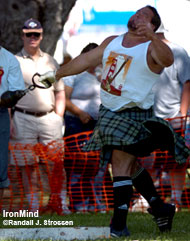 It came down to the 28-pound weight for distance, as Ryan Vierra and Dave Barron were tied going into this . . . the final event of the 2006 Heavy Events World Championships. IronMind® | Randall J. Strossen, Ph.D. photo.

This year's contest drew buckets of praise for the depth and breadth of the competitors and bodes well for the future of the sport, and once again the mighty efforts of San Francisco's Caledonian Club and the Alameda County Fairgrounds are to be praised.

Here are the final places and points: