Paradise Island, Bahamas - It could not have been any more exciting as the World's Strongest Man title came down to the last pair in the last event on the last day of the finals. 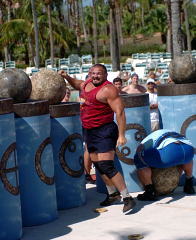 It was a battle up to the very end, but once the Atlas Stones started, Vasyl Virastiuk was not to be denied. Zydrunas Savickas finished second overall, followed by Mariusz Pudzianowski, Magnus Samuelsson, Raimonds Bergmanis and Svend Karlsen.

This year's contest was long, grueling and filled with excitement, and the TV shows will be broadcast to 75 countries beginning about Christmas time. For exact schedule times, please check with BBC in Britain, ESPN in the US and TV3 in Sweden.