Atlanta, Georgia - The MHP Pro Invitational Strongman Championships got off to a rocking start at the GNC Show of Strength today and Van Hatfield is in the lead at the end of the first day. 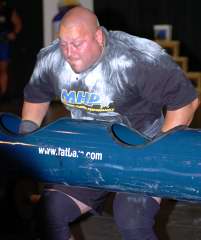 One of the names on everyone's lips before this contest even began was Van Hatfield and he didn't disappoint his fans as he ended the first day with impressive performances that put him into the lead.

The car squat was the first event, and Mark Philippi won with 21 reps, followed by Jon Andersen at 20 and Van Hatfield at 19. Van Hatfield had actually completed 21 reps, but only 19 were counted.

Once again, Van Hatfield produced a shining performance, and after he had turned in the winning time, he pressed the 340-pound overhead again just to please the crowd. Karl Gillingham was a close second to Van Hatfield (about one second slower), and Steve Kirit was third.

At the end of the first day, the points are: