Considering the thousands of people who have tried the GNC Grip Gauntlet, it means something that Wade Gillingham has only been really impressed a few times - and one of those was last night. 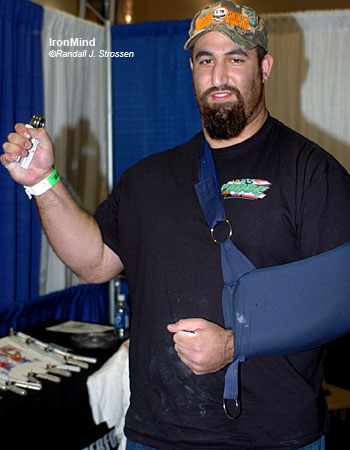 Vache Sevajian, with a torn pec no less, came within half an inch of closing a No. 4 Captains of Crush® Gripper at the GNC Grip Gauntlet yesterday and, also with a legal start, he dominated a No. 3 CoC straight from the package. IronMind® | Randall J. Strossen, Ph.D. photo.

Wade Gillingham is a pretty calm guy, but he came running out of the Expo Hall at the FitExpo to track down Randall Strossen at the strongman competition. "You want to see something?!" he said; and so here we go, just like with Tex Henderson, out of the blue, a guy comes along who has absolutely devastating grip strength, and it's all the more impressive because it comes in the package of big but modest guy who is about as far from a grip specialist as one could imagine.

And to top things off, Vache also completed the GNC Grip Gauntlet - it was quite a night for this young man.