Paul Ohl has filed an update on the Louis Cyr movie, a large scale undertaking about the legendary strongman. 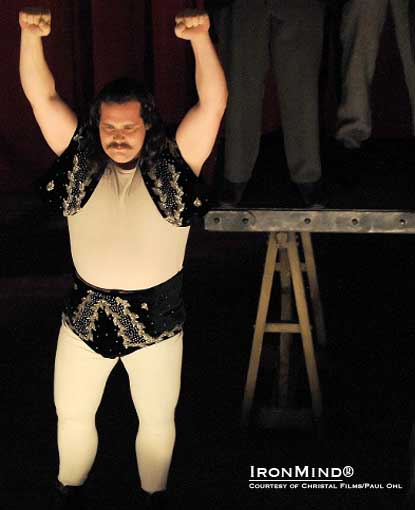 Taken from the set, Antoine Bertrand, as Louis Cyr, and the backlift.  IronMind® | Photo courtesy of Christal Films, Inc./Paul Ohl.


The Louis Cyr Movie on Schedule
by Paul Ohl

With a film budget of nearly $ 9 million dollars, the story covers 30 years of the life of the legendary strongman Louis Cyr (who died in 1912  at age 49 from kidney failure known as Bright disease).

The total shooting adds up to 45 days including 5 days of winter scenes to be shot in December.

All in all, the production totals 21 location sets in 7 different areas including historical old Montreal . It includes 132 character roles, 200 stand-ins, 500 costumes, 50 horses, 20 carriages plus old time strongman equipment based on the Louis Cyr's museum artefacts. Add to this two months of studio special effects. The entire artistic crew ( some 25 members) was in for six months of intensive research in order to recreate the ways of living of the farmers, mill workers, aristocrats, circus managers and strongman performers of the late 19th century.

Producer Christian Larouche and movie director Daniel Roby reported that the biggest challenge has been met, that of being right on schedule due to exceptional weather conditions amongst other things. Larouche further said that he was told that the movie would be a first ever since the industry had never before produced a feature film based on the life and times of a famous
strongman.

As for Antoine Bertrand, the actor who had the burden of carrying Louis Cyr's character on his already massive shoulders, he was quoted a few times during the shooting : "The movie about such a legend had to be made, it was a must, he said. I was casted 7 years ago and at one point I thought it was never to be. But when we got the green light I felt better prepared than I would have been at age 25. I have a deeper understanding and a better insight of what strength meant to people who, back in the past century, were desperately trying to shake off their fate of losers. They had then somebody to look up to; Louis Cyr. He became the bearer of both hope and victory. He made it happen. "

In preparation for what he said himself being the leading role of a lifetime Antoine Bertrand went on a boot camp type of training for nearly one full year while reading over and over Paul Ohl's definite biography of Louis Cyr.  Asked about his views of Louis Cyr's legacy to modern strongman, Paul Ohl said: "The least remark about Louis Cyr's influence over more than one
century would be that he remains a legitimate claimant amongst 3 other strongmen of being the strongest man that ever lived."

The two hour plus feature movie LOUIS CYR is scheduled for release on June 28, 2013.