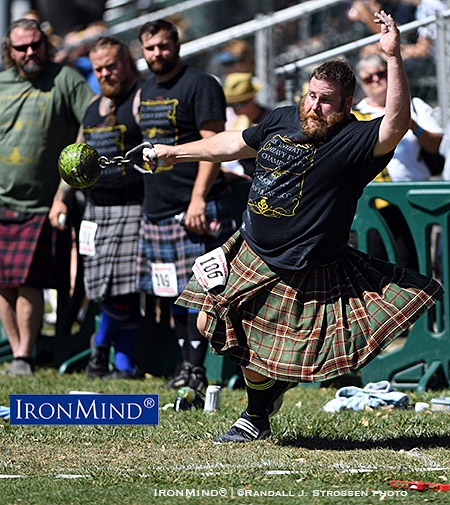 World record holder in the 56-lb. weight for distance, Spencer Tyler ended the first day of competition in the US Heavy Events Invitational tied for the lead with Dan McKim. IronMind® | ©Randall J. Strossen photo

After the first day of the US Invitational Heavy Events Championships, Spencer Tyler and Dan McKim are tied for the lead.

They are neck and neck after day one at the San Francisco Caledonian Club’s 151st U.S. Heavy Events Championships in Pleasanton, California: Spencer Tyler, current world record holder in three events, and multiple times world champion Dan McKim ended the first day’s competition on 10 points each, followed by Matt Vincent on a distant 23.

New to the pro class, Tyler distinguished himself early on in the Braemar stone with a second place throw of 39’ 3” to McKim’s third-place 37’ 9”—Andy Vincent was first with 40’ 11”.

Both McKim and Tyler were the last men standing at 16’ in the weight-over-bar, with Tyler making 17’, which McKim missed, and in the caber, McKim bested Tyler with two 12:00s, landing second and fourth place, respectively.

Athletic director Steve Conway called in mild temperatures for the day, and as always, capably managed the five classes of athletes competing simultaneously on the field, with judge Laurie Moore keeping everyone honest. Announcer Sabrina Robinson. rivaling Matt Vincent, kept the information flowing and funny, laced with with plenty of zingers.