The Texas Stoneman - Travis Ortmayer - notched up his first ever Strongman Champions League (SCL) victory this weekend, as he took top honors in Holland, and he also made some strongman history: Marcel Mostert told IronMind® that this was the first time an American won an SCL competition. 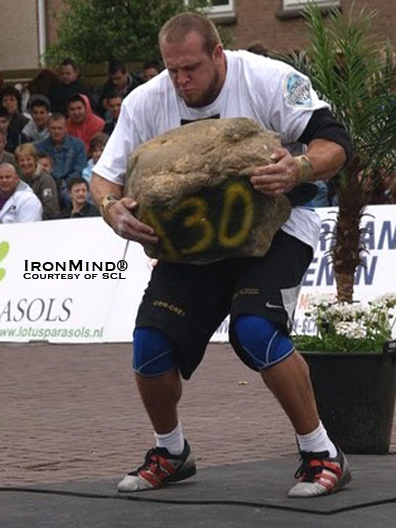 
“I was really starting to worry about making your prediction [about having a terrific year] come true until last weekend in Holland!,” Travis Ortmayer told IronMind®’s Randall Strossen today.  “I've just been crap lately at the other shows.  Weight loss and no training will do that to you I guess.  So will a total lack of sleep due to a little one waking you up all night!  I ended up winning that show, and on my first Father's Day no less.  It was my 80th competition too - man I feel old.

“So there you go; my last big Grand Prix until WSM was a win, and I think this will give me some good momentum for my preparation,” Ortmayer said.

Sunday, 20 June 2010: This was a great competition in Holland with Travis Ortmayer defeating Misha Koklyaev in a thrilling fight and SCL Holland was the first SCL [competition] won by an American.

Travis was so determined to do well, after missing the podium from last two SCL contests (4th and 5th place), he came to get in the top 3 again, but instead, he won the SCL Holland.  It was a real exciting fight between Travis, Misha, Ervin and Etienne Smit from South Africa.

With just 1 point between this top 4, the decision fell in the last event , the Atlas stones, where the Texas Stoneman showed why he had this nickname.  Etienne Smit disappointed himself with the stones, as he stopped after the 2nd stone. He made a mistake and the stone fell on his chin, he got dizzy and stopped himself.

The comeback of Jarno Hams was not as he expected.  He did a great rock lift with a 2nd place behind Travis , but got there also a little injury on his wrist, and with the knowledge of having the Dutch Nationals in 3 weeks, he decided to stop after 3 events.

With thanks to our co-organizer Paul Rabelink and Wunderland Kalkar, and the great performance of our athletes, we are very satisfied with the edition SCL Holland 2010.


Here are the the overall results:


We had 36 athletes competing in 6 stages of the Strongman Champions League tour 2010.  This is the overall results list so far, with Terry, Travis and Misha in the top 3.