“The great strongman Tomi Lotta from Finland is in super shape,” Marcel Mostert told IronMind.  “He is preparing for another Guinness record, in a few weeks in China, to break his own Guinness record in bat-breaking. 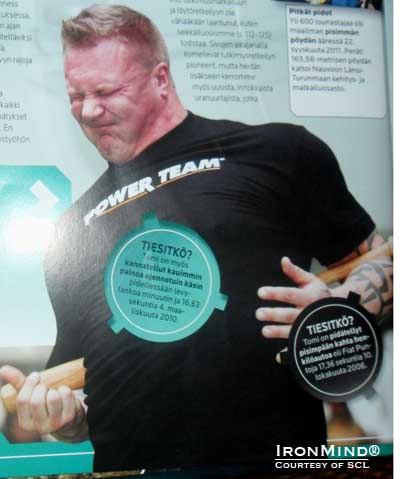 
Mostert said that will be in the SCL finals in Martinique first and then he will fly directly to China for this attempt to break his own record.

“Lately , Tomi does a lot of shows and expos for the SCL sponsor Power-Team,” said Mostert.

“An event with their tools can be seen this coming Friday, when the Strongman Champions League Gibraltar competition is broadcast on Eurosport.  [This is] a must-see, where strongman are dancing with the monkeys of the Rock Gibraltar.”

Hmmm—that must be a first, even in the world of strongman!