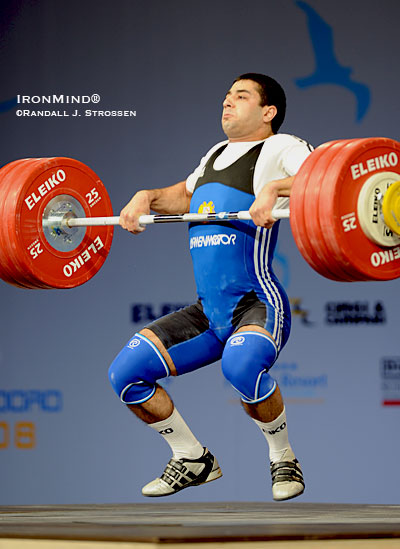 When everyone else was done, Martirosyan started snatching, ripping through 150 , 155 and then 158 kg, the last lift being a junior world and a junior European record. Martirosyan continued to show his strength in the clean and jerk, where he opened with a very strong 180 kg, done with an easy power jerk.  This lift gave him the junior world and the junior European records in the total. Then he sat back, as the rest of the class took shots at moving into gold medal position in jerk, although none could possibly touch Martirosyan in the total.

Coming back in with 185 kg on his second attempt, Martirosyan nailed it, for new junior world and junior European records in the total, again. Although he easily power jerked the weight, he had to take a step forward on the jerk to fully control the bar. Not content to stop here, Martirosyan called for 188 kg on his third attempt, going for a junior European record in the jerk, and, for the third time in the evening, the junior world and the Junior European records in the total. The lift looked easy, with another power jerk polishing off quite a performance by the young Armenian. Dabaya, the 2006 world champion, made the same 188 kg on his third attempt, picking up the gold medal in the jerk on bodyweight.