Contested in “in heavy rain on an ice-cold day,” the MHP Strongman Champions League was unfazed by bad weather and Icelander Hafthor Julius Bjornsson probably felt right at home as he “won the competition, followed by a new Latvian star, Dainis Zageris,” Marcel Mostert told IronMind. 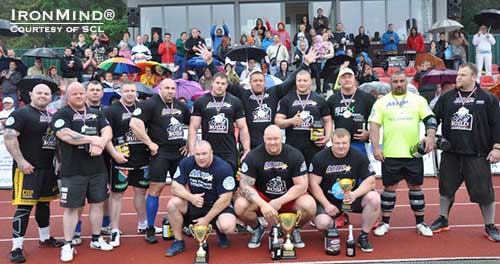 
“Dainis showed his power, as he is in the best shape of his life now and he crushed the field with such names as Misha Koklyaev, Johannes Arsjo and Ervin Katona.

“The mighty Icelander ‘Thor” was still too much for him, but maybe that’s also a matter of time.  “In third place finished another new star, Meelis Peil from Estonia.  He did very well, with an impressive second place on the Conan’s Wheel and all other events in the top five.

“Dainis broke the Latvian record on the Power Stairs, that time was in hands of Raimonds Bergmanis.  Raimunds was just proud of him for that, as he was the announcer at the competition.

“It was a pity that it rained the whole day because the place, equipment and the crowd were perfect.  With many thanks to SCL co-partner AB Build.

“It was a great event in Latvia, so nice to be back there again, as it is the country where the first SCL competition ever started.  Contracts are already signed for the next year to do again an SCL stage,” said Mostert.

For full details, please visit the official SCL website.   The next stage is SCL Czech on June 8—watch for the official announcement on IronMind. 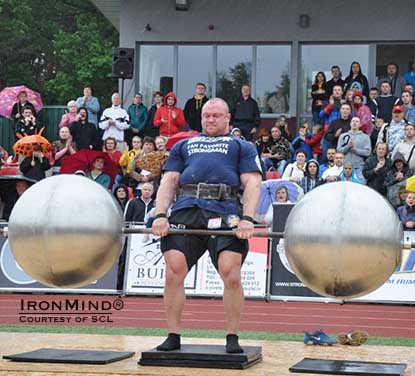 Dainis Zageris (Latvia) brushed aside all competitors but one at MHP SCL–Serbia, serving notice that he’s hunting for scalps in the strongman world.  IronMind® | Photo courtesy of SCL.