Athens – It's improbable, but while lifting in the B-session of the men's 85-kg category today, weightlifter Andrei Rybakou (Belarus) would have made a world record snatch if only he had been one second faster. 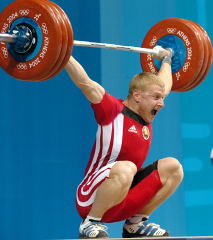 Andrei Rybakou snatches 183 kg, but time had run out and the lift was turned down. IronMind® | Randall J. Strossen, Ph.D. photo.

As he gripped the bar, in the final stages of preparing to assault the world record in the snatch, Andrei Rybakou probably didn't even hear the buzzer sound, announcing that time had run out for his attempt. In the next instant, Rybakou completed a great lift, and even got a white light from one of the side referees (Alexander Kurlovich), but the other two referees had (correctly) red-lighted the lift. So close, yet no cigar.