Francis Brebner has just filed this report on the Royal Braemar Gathering for IronMind®. 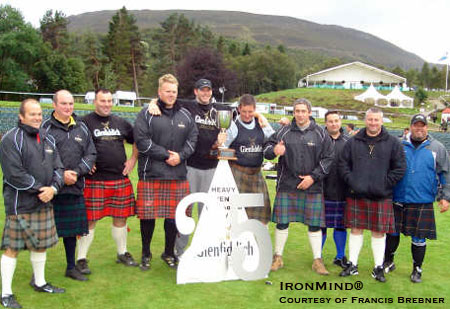 Here's the group shot of the athletes who competed at this weekend's Royal Braemar Gathering (Braemar, Scotland). IronMind® | Photo courtesy of Francis Brebner.

The Grampian Games Association is made up of 12 Highland Games throughout the Grampian Highlands, with the first Games of the series in Oldmeldrum in June and coming to a climax with the final championships in September at the Royal Braemar Gathering, which is attended by Her Majesty the Queen.

More than 20,000 spectators pack the small town of Braemar of roughly 500 inhabitants. It is quite an honor to compete in such a sporting event but even more to win and be presented by Her Majesty the Queen. For myself, I can say it was one the highlights of my sporting career in the Highland Games. Glenffidich has been the sole sponsor of the championships for over 25 years, with many great Scottish throwers coming through the junior ranks, such as Stephen King, Gordon Martin, Alistair Gunn, Bruce Aitken, Francis Brebner, and Craig Anderson.

Not only has such sponsorship helped bring on the younger generation of heavies nowadays, it has also helped the profile of the Games involved with the Glenffidich Championships League, which promotes the Games far and wide.

A star-studded cast of athletes competed on what Ryan Vierra called a "bitterly cold day," but that was not dampened as "the atmosphere of the Games felt like electricity."

In the opening event of the Royal Braemar Games, the 16-lb. stone, Australia's Aaron Neighbour claimed the first win of the competition with a putt of 52' 1", with big Bruce Robb in second, Bruce Aitken third, and David Dowson sneaking into fourth.

The next event was the 28-lb. weight for distance, in which Bruce Robb had set a ground record at Braemar last year with a throw of 87', and he was a favorite to win again this year - which he did, with a distance of 79' 3". Second was Neighbour, third Vierra, and fourth, Bruce Aitken. Again in the 56-lb. weight over the bar, Robb took another win but had to share with Australia's Neighbour at a height of 15' 6"; third equal were Vierra, Bruce Aitken and Stephen Aitken.

At this point in the championships, the Queen and the Duke and their royal party arrived and were seated in the royal box, where they could oversee all the Games events that were participating.

The heavy hammer was won by Bruce Aitken, with a throw of a 112' 10" that reigned supreme. In second was brother Stephen Aitken; third, Stephen King; and fourth, Ryan Vierra.

The open stone was an exciting event, with Robb taking top honors; second equal were King, Vierra, and Neighbour.

However in the Norman Murray Caber Challenge, Ryan Vierra, with expert skill and timing, nailed the winning toss and has now been added to a list of only a dozen or so athletes who have done this over the many years at Braemar.

After the presentations were made by Her Majesty the Queen, the royal party left the Games to a standing ovation from the many thousands of loyal, ardent fans and spectators that have traveled far and wide see a glimpse of the Queen and to experience this ancient sport first hand.

The Games carried on with the 16-lb. hammer, which was won again by Bruce Aitken at a winning distance of 132' 6". Second was young Craig Sinclair, who is fast making his presence felt in the open athletics after making his way up through the qualifying junior ranks; third was Stephen Aitken and fourth, Stephen King.

In the final event of the championships, the 28-lb. Braemar standing stone putt, Robb won with a respectable putt of 35' 10"; in second was Neighbour, third was Bruce Aitken, and fourth was Vierra.

Bruce Robb was the overall winner of the Royal Braemar Games on the day, with Bruce Aitkin in second, and Ryan Vierra in third.

Vierra expressed that Braemar was a tremendous experience that left him feeling all the more motivated for next year's season and the World Championships, which are to be held in Edinburgh, Scotland: "I am so happy to have finally competed at the famous Royal Braemar Gathering and to have won the Royal Braemar Challenge Caber. Both Braemar and Pleasanton [organized by the Caledonian Club of San Francisco] have clashed with the same dates over the years until this year, which allowed me to enjoy competing in both Games back to back. I would say it is something that every Highland Games athlete should experience at least once in his athletic career.

"This has left me somewhat yearning for more, and I would like to return to compete in the near future, if all goes well."

The overall winner of the Glenffidich Championships series was Bruce Aitkin for his record-breaking tenth time in a row: