Other than Captains of Crush® Grippers, no test of grip strength has the recognition, history or track record of the Rolling Thunder® - it’s a seminal test of grip strength that is as fun as it is challenging, and it has been put to the test by the world’s strongest men for nearly two decades. 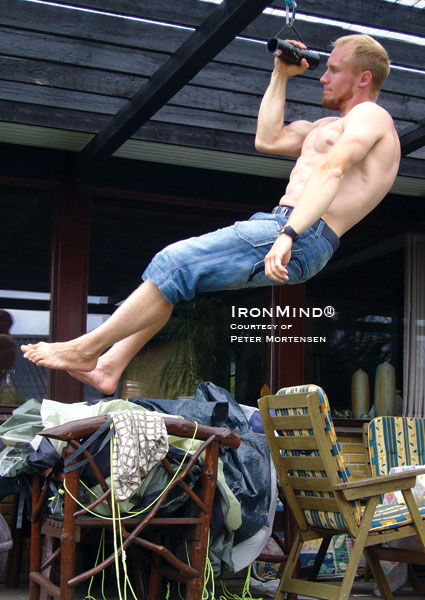 Peter Mortensen, a rock climber from Denmark, does a one-arm pull-up on a Rolling Thunder® Revolving Deadlift Handle:  “There seems to be a strong correlation between strength on revolving handles or dumbbells (especially thick handles) and climbing hand strength . . .,” Peter told us.  Reprinted from the 2009 IronMind® catalog - Volume Eighteen, with permission.  IronMind® | Photo courtesy of Peter Mortensen.

Developed by IronMind® in 1993, the Rolling Thunder® is directly linked to the classic feats of strength that combine basic lifts with thick handles and bars, and its origins are most closely associated with the one-hand deadlift that has such a prominent place in strength history.

Noting that, “One of the problems with evaluating thick-handled, one-hand deadlifts is that it can make a HUGE difference whether or not the handle revolves,” IronMind®, in 1993, replaced the stationary thick handles it had sold in the past with the Rolling Thunder®, so named because it rotates and because of the potentially thunderous sound of missed lifts - both from the plates themselves and from the frustrated lifter.

Late in 2008, IronMind® retooled the Rolling Thunder® and took it from the lab to the field as Wade Gillingham, among others, put it to the test.  Frankly, we at IronMind® had outsmarted ourselves as we had gotten a little overzealous on one manufacturing tolerance and there were a couple of other instances where theory and practice did not align perfectly, so we did some fine tuning to arrive at what you see today:  the no-excuses-have-fun-test-of-grip-strength known simply as the [new] Rolling Thunder®.

So fundamental is the Rolling Thunder® as a test of grip strength that IronMind® begins any list of the world’s strongest grip men by considering it along with the Captains of Crush® Grippers, and only three men have ever officially closed the No. 3 Captains of Crush® Gripper, or beyond, plus held the world record in the Rolling Thunder®: Andrus Murumets, Laine Snook and Magnus Samuelsson.  In our book, these men define the top echelon of grip strength, although we would prefer to see a big lift on the Hub-style Pinch Gripper thrown in to cover the element of pinch grip strength, as well.  Also, we consider closing at least the No. 3 Captains of Crush® Gripper and lifting at least 250 pounds on the Rolling Thunder® as defining the threshold for truly world-class grip strength, and such guys as Brian Shaw, Wade Gillingham and Chad Woodall come to mind as being in this zone of the grip-strength world.

Incidentally, when IronMind® says “close a Captains of Crush® Gripper,” we mean according to the official rules, period, and when we say “lift the Rolling Thunder®,” we mean a new one, so that everyone knows we are not talking about something that either due to nature or nurture has basically frozen and might well be adding something like 50 pounds to one’s top lift.

In the not-too-distant past, a guy with a huge bodyweight disadvantage in the Rolling Thunder® World Championships was egged on by yours truly, who pointed out that he was knocking on the door of pulling a bodyweight lift on the Rolling Thunder®, which nobody else was in the range of doing.  In the spirit of this lift, IronMind® will send a Rolling Thunder® handle with our compliments to the first person who can name this man, along with when and where this took place.  Email responses directly to rjstrossen@ironmind.com; only one entry per person, please.

And in the meantime, if you seek grip greatness or merely want to have some fun with grip strength training, hook up with the Rolling Thunder® - it complements your beloved Captains of Crush® Grippers and, just like them, if you’re strong, it will allow you to prove it.