Describing the IronMind® Overhead World Challenge, Fortissimus president Paul Ohl said, "It is a new act and it is meant to commemorate the great strongman performances in overhead lifts." 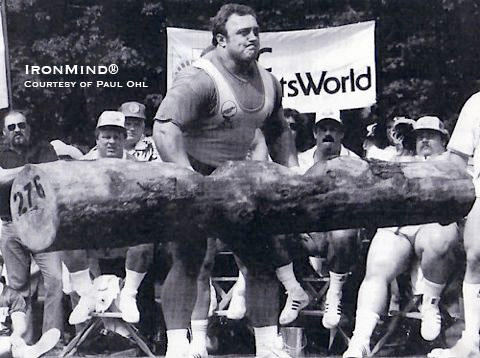 Honoring Bill Kazmaier's world-record performances on the log is one of the reasons behind the format of the IronMind® Overhead World Challenge at Fortissimus 2009. IronMind® | Photo courtesy of Paul Ohl.

"It will feature the world records at the true log lift by Bill Kazmaier in 1980 and 1988; by Zydrunas Savickas in 2004, remarkable Apollon Axle lifts; and the one-arm great lifts by the legendary Louis Cyr," Ohl continued. "IronMind® can confirm that the combined overall poundage of the two events will be of 3,208 lb. (1,458 kg).

"We remain convinced that raw overhead power is what defines the essence of strongman along with the stones and we are proud to give it the exposure it deserves. Put in perspective with the overall profile of the 2009 competition, the IronMind® Challenge accounts for 20% of the contest," Ohl concluded.

The full, official list of events for Fortissimus 2009 will be released on March 17.