He's the man who showed that excuses for not closing a Captains of Crush No. 3 Gripper per the official rules were just that - excuses - and now he's upped the ante again, by becoming the first person to certify on the No. 3.5 Captains of Crush® Gripper: Tex Henderson has just produced the top mark in the gripper world this year. 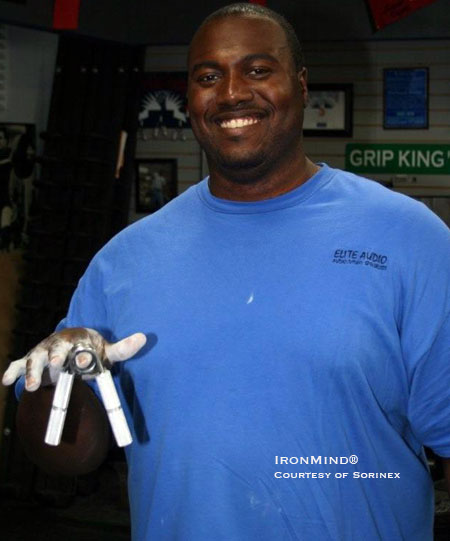 Tex Henderson produced the top gripper performance in the world so far this year at Sorinex yesterday, becoming the first man to officially close the No. 3.5 Captains of Crush® Gripper. IronMind® | Photo courtesy of Sorinex

Where better to take his shot at this than at Sorinex, with Richard Sorin doing the honors as the official referee. Sorinex is where Tex Henderson officially destroyed a Captains of Crush® No. 3 Gripper in 2006 - it was the perfect setting, with the Diesel Crew's Global Grip Challenge being hosted by Richard Sorin, and Tex nonchalantly doing what some keyboard warriors were saying was impossible.

Yesterday, Tex was pretty beat up, coming off a weekend strongman contest, and after five close misses, he rested while Richard Sorin was hard at work in his corner. On the sixth attempt, the sliver of daylight that had been showing between the handles disappeared, and as Richard Sorin described it for IronMind®, it was "The close heard 'round the world."

Many thanks to Richard Sorin and everyone else at Sorinex who supported Tex Henderson's effort, and for the man, himself, "Congratulations, Tex - you've just been certified on the Captains of Crush® No. 3.5 Gripper. You are the first, and that's forever!"