At some point, luck enters the equation, but maybe if you’re good enough you can run up a winning streak that defies the odds - something like top strongman Zydrunas Savicka’s perfect record in 2009: He’s 10 and 0. 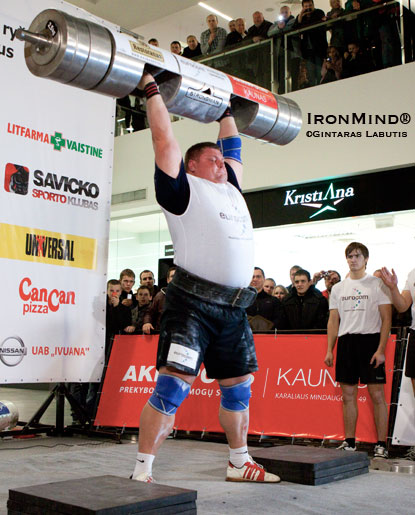 
Not that Zydrunas Savickas is any stranger to success in strongman, but in 2009 he further burnished his image as he swept through all the top contests of the year and this past weekend he broke the world record in the log lift - his world record - yet again.

Backing up, Zydrunas Savickas hoisted a 212.5-kg log a the 2009 Strongman Champions League (SCL) Log Lift Championships in Kaunas, Lithuania on November 21.  For context, Krystof Radzikowski (Poland) was second with 195 kg and Vidas Blekaitis (Lithuania) was third with 190 kg.

“In this competition I also try to lift 220 kg and was very close,” Savickas said.  Sometimes a lifter has an exaggerated sense of how close he was on a missed lift, but that was not the case here as head referee Marcel Mostert told IronMind®, “He nearly made it; had it 2 times almost locked out.  I did find it already a great performance to have it locked out 2 times almost to the end.”

“I think next year I will lift this weight,” Savickas said, and his performance record aside, consider that Zydrunas Savickas accurately predicted his most recent record a year in advance so history might repeat itself.

Reflecting on his 10-contest sweep this year, Savickas, the super strongman, told IronMind®, “2009 for me was very good.”

We’d have to agree with that assessment.