Travis Ortmayer has just raced through the stones in a blazing time at the North American Strongman Capitol City Classic in Louisiana. 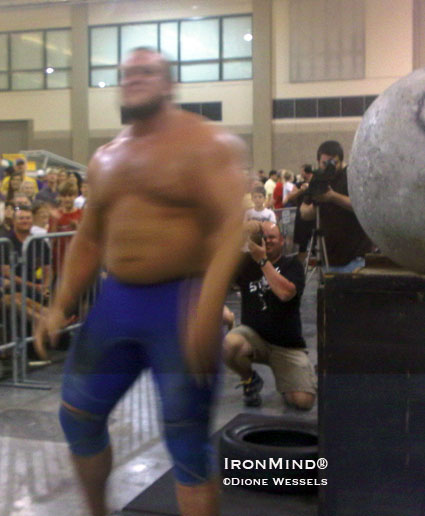 He’s a blur, but that’s Travis Ortmayer after loading five stones in what might be the fastest time ever for  a comparable series of strongman stones.  IronMind® | Dione Wessels photo.

“Not sure if this has ever been done,” NAS president Dione Wessels told IronMind®, “but Travis O [as in Ortmayer] just loaded a 5-stone series in 35.28 seconds.  The stones weighed 290, 315, 380, 435, 480 pounds.  I would think it is a new world record.  It was done at a NAS sanctioned event in Louisiana at the Capitol City Strongman Classic.

“Travis is here to get training for World's [as in the World’s Strongest Man contest].  Andy Vincent is here also training,” Wessels explained.

As for Travis Ortmayer, he was unfazed by his stellar performance, telling IronMind® he “can cut that time in half and break that time easily!”