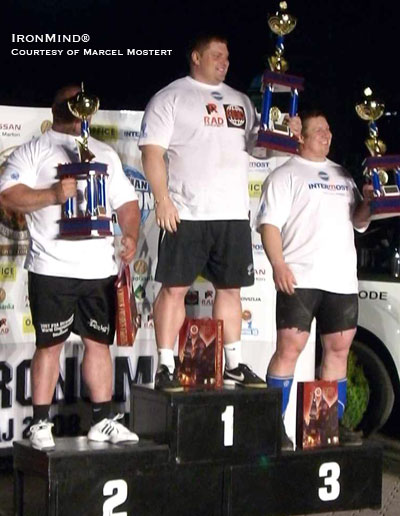 But don't think this was a slam dunk for the big man from Lithuania. Contest organizer Marcel Mostert told IronMind® that Zydrunas Savickas, "really had to go to the bottom of his power, as he said after the deadlift, to secure his overall win. He had to win in the deadlift."

"Because of a bad start in the first event, arm-over-arm car pull, where Zydrunas got eighth place, he lost valuable points against the winner of this event, Andrus Murumets, and the Serbian hero and second-place finisher in this event, Ervin Katona."

Next up was the Viking Press and "even with a new world record on the Viking Press (with an impressive 20 reps with 140 kg), Zydrunas still had to fight the whole competition as Ervin Katona was leading until the second-to-last event.

"Both men had 44 points starting the deadlift. Ervin Katona and Vladimir Kalinchenko (the new Russian strongman, who replaced Misha Kokylaev, who had a bad flu) both did an impressive 12 reps at 320 kg deadlift, using a normal bar from the ground. Zydrunas never had to push himself so hard, he said, to get the last 13th rep just in time to win the deadlift, and to take the lead overall. He was almost falling down after finishing the deadlift.

"It was a great event in total with 5,000 spectators on a sunny 25-degree [Celsius/ 77-degree Fahrenheit] day in Serbia.

"I am very happy with the event and we will have a spectacular broadcasting from this in four weeks on Eurosport," Marcel Mostert said.