"All I did was play a little keyboard, hoot and holler my address, and lift a truck . . . what's the problem" 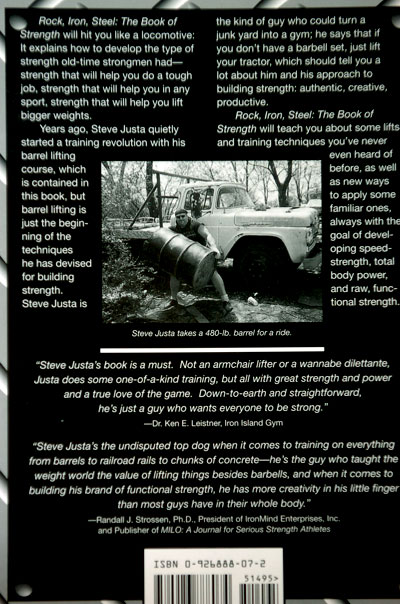 The back cover of Rock Iron Steel: The Book of Strength by Steve Justa shows the author in action. This book is considered the real deal among functional strength training books. Courtesy of IronMind® Enterprises, Inc.

Never one to follow the herd, Steve Justa's recent videos on YouTube left a lot of people chatting and not all their comments were pretty. Unperturbed by any flak, Steve Justa said, "Controversy creates cash," and the vice president of his local bank has been impressed by how much interest Steve has stirred up.

A MILO® author whose creativity is highly regarded at IronMind®, Steve said that some people have been bragging him up, while others were hammering him down, but none of it bothers him. "It goes with the territory," Justa said.

Not to be limited by convention, Steve Justa's barrel lifting course was a prime example of his cutting edge thinking and the old ads for his White Buffalo (a training tool for arm wrestlers) gave form to his different way of doing things. Comparing his book Rock Iron Steel to other functional training books has been said to be like comparing an actual Hell's Angel to an accountant who doesn't shave one weekend and then rides around on his Harley in a black T-shirt.

Justa said that he had the option of screening comments, but he said no, preferring "to let them have their say."

Describing himself as "acting like a nut," Justa explained that he not only knew the video would be controversial, but also that this was his intent. "I wanted to leave an impression in their minds," he said. "I wanted to make something they wouldn't forget," and according to what Justa hears, "it's spreading like a bonfire" across the Internet, so there's no doubt that he has succeeded.

"I need to make some money," Justa said. "I'm sick of being broke. I have 30 years of knowledge and need to transform that into cash."

And as far as being a nut goes, Steve Justa says, "To be a hardcore lifter, you have to be half crazy."