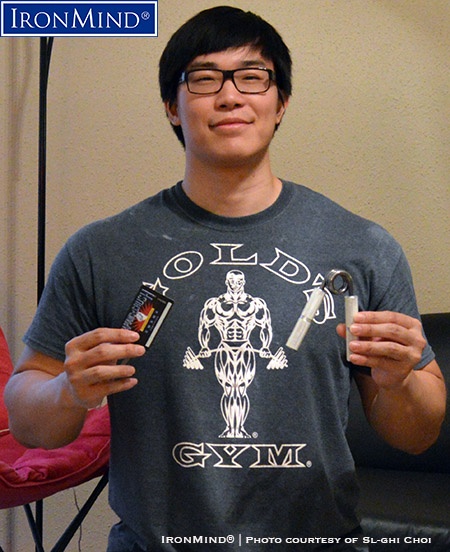 On his official attempt to close a Captains of Crush No. 3 gripper, SL-ghi Choi “dominated” the gripper, his referee, Tommy Jennings, Jr., told IronMind. IronMind® | Photo courtesy of Sl-ghi Choi

Anyone who certifies on the Captains of Crush No. 3 gripper is impressive, but some performances warrant an extra exclamation point and Sl-ghi Choi’s official close is a case in point.

Let’s fast forward to what Tommy Jennings, Jr., SL-ghi Choi’s referee on his official attempt to close a Captains of Crush No. 3 gripper:
“I’m pleased to report that Sl-ghi Choi did indeed close the No. 3 under IronMind's certification rules. He dominated the No. 3, making it look easy,” reported Jennings.

As an added twist, SL-ghi Choi had asked IronMind whether he could also take a shot at officially closing a Captains of Crush No. 3.5 gripper and we said yes.

Back to Tommy Jennings, Jr: “Unfortunately he was not able to fully close the 3.5 [Captains of Crush No. 3.5 gripper] today. He did get the 3.5 to within a pencil’s width of closing it. I have no doubts that Sl-ghi will indeed officially close the 3.5 in the near future.

“I’m very impressed with this guy. Super humble, lots of integrity, and tons of potential to climb to the top of the ladder with grip strength . .  . “I was surprised to see the size of this guy: I’m 6' and 225 lb. and he seemingly towered over me, with huge hands to boot.

“We visited for a while after his certification attempt and talked grip. I was borderline floored when Sl-ghi told me he had only been training grip for roughly 4 months. As a bit of an extra credit type deal to further test Sl-ghi's grip, I brought along my Thomas Inch dumbbell replica for him to try after his cert attempt. To my amazement, he was able to pull off a dominant lift in EITHER hand and without ever seeing or touching an Inch dumbbell replica in person before.

“This guy, for real, hasn't done any specific grip work other than the occasional gripper workout for the last 4 months and he credits his grip strength thus far to his bodybuilding routine.

“All that said, expect big things from this guy in the months and years to come—he definitely possesses some serious potential to possibly dominate the entire grip scene in the future. No kidding!

“All in all, it was an honor to meet him and also ref his certification,” said Jennings.

“I only trained with grippers for 4 months, but I have been doing bodybuilding for 8 years,” Sl-ghi told IronMind.  “Currently, I am only focusing on grippers and I train once a week.

Many thanks for refereeing, Tommy, and congratulations Sl-ghi Choi because it’s official: you have been certified on the Captains of Crush No. 3 gripper.