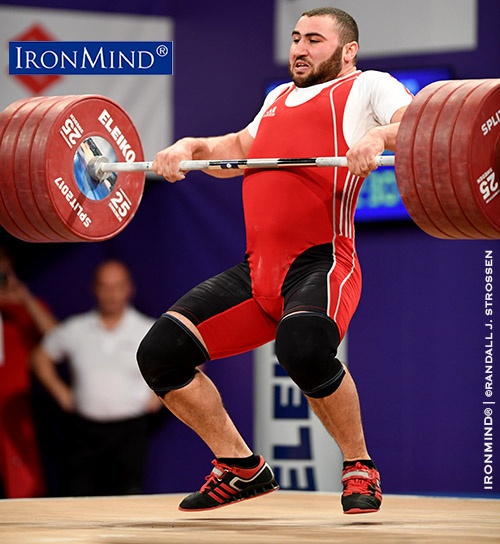 There was a lot of red on the board in the 105-kg class at the 2017 European Weightlifting Championships, which was won by Simon Martirosyan. Martirosyan’s performance included this 230-kg clean and jerk. IronMind® | ©Randall J. Strossen photo

Split, Croatia—Typical of this class, Simon Martirosyan (Armenia) only made three good attempts, but they were good enough to sweep all three gold medals in the 105-kg class at the European Weightlifting Championships.

Martirosyan only made his opening snatch (184 kg), and he missed his first clean and jerk (220 kg), but then regained his stride as he repeated with the 220 kg, made it, and then polished off 230 kg on his third attempt.

Russia’s David Bedzhanian bombed out in the snatch when he was turned down twice with 170 kg and then missed it on his third attempt, but he had hopes of turning around his fortunes on the clean and jerk.

After opening with a comically easy looking 213 kg, he followed with a solid 221-kg lift on his second attempt to move into gold medal position, which was then eclipsed by Martirosyan’s 230-kg lift. Bedzhanian called for 231 kg on his third attempt, racked the weight, but could not stand up.