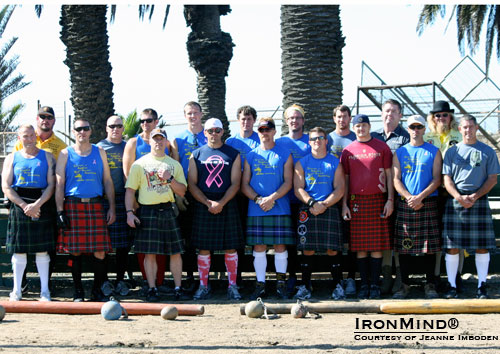 No reason why you can’t combine the Highland Games with palm trees.  IronMind® | Jeanne Imboden photo.

The Seaside Highland Games in Ventura this past weekend were a nice finish to the Highland Games season here in California.  With perfect weather conditions and over 15,000 spectators over the weekend of its many festivities, one of which included the SAAA Lightweight World Championships organized by athletic director Brandon Godman.

On the first day of competition, the combined men’s amateur A group and Pro division witnessed a great series of throws with Rusty Price having a practically clean sweep of all the events except for the Braemar stone and the 56-lb. weight over the bar—which was truly one of the highlights of the weekend as Jon O’Neil clearing the height of 17’ and later attempted the World amateur record of 17’11” and just narrowly missed out.

The main event for the Ventura Highland Games was the lightweights Worlds under 200-lb. class, with a total of fifteen athletes battling it out over eight grueling events on Sunday’s final day of athletics.

Moving onto throwing the weights for distance, the 28-lb. weight for distance proved an easy win for Mark Howe with a victory throw of 63’ 4-½” ; second place was Jeff Thornton with 60’ and in third was Luke Hilgers with 56’ 2”.

The 42-lb. weight for distance was to be another splendid winning throw by Mark Howe, with a distance of 42’ 8”.  In second place was Jeff Thornton with 40 ’8” and Jonnie Stone made an appearance for third place with a throw of 40’ 4”.

The 16-lb. hammer was a great competition with Scotland’s Scott Clark from the Island of Arron winning this event with a throw of 102 ’6”.  Second place was Jeff Thornton with 98’ 7” and third place Mark Howe with 95’9”.

Once more with the 22-lb. hammer Scott Clark excelled in his spectacular event with another graceful winning throw of 83’3”, second place Jeff Thornton with 81’9” , third place was Mark Howe with 70’1”.

The 42-lb. weight over the bar was to prove a cruel and devastating event for Mark Howe who was leading the competition. Mark was getting the height easily but was struggling to get the arc for clearing the bar and landed way down in 11th place, clearing the height of only 13’.  The event was won with a height of 15’ by USA’s Jeff Thornton.  In second place was Scotland’s Scott Clark, with 14', and in third place on count back was Phillip Sansotta, with 14' also.

The final event, the 16-lb. sheaf toss, was won by Jeff Thornton with a height of 26’.  In second place was Jonnie Stone, also on 26’ on count back.