It was was a star-studded field at the Portland Highland Games over the weekend, producing some big throws and a big victory for Sean Betz. 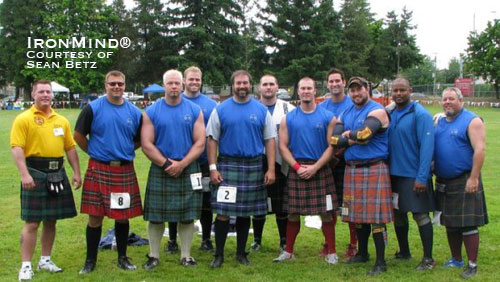 Here’s the a group photo from the 2010 Portland Highland Games, with the winner, Sean Betz, front and center.  There’s over a ton-and-a half of muscle squeezed into that shot.  IronMind® | Photo courtesy of Sean Betz.

There was big throwing all around this past weekend at the 2010 Portland Highland Games as the best in the USA went at it hot and heavy over seven events.  Several thousand spectators turned out to watch the festivities, which included the Simon Fraser University Pipe Band from Vancouver, Canada, which is the six-time and reigning world champion.

The 16-lb. hammer was another impressive competition as Pockoski, the current IHGF World Hammer Throwing champion, pulled out his best to win this event with a throw of 138’ 6-1/2” over Betz, who placed second with 134’ 3”.  Brock landed in third place at a distance of 131’ 2”.

The final event, the caber, was very close, with Betz and Brock sharing the win with 11:55 tosses; in third equal were McKim and Frasure with 11:50 and 12:10 tosses.

Betz commented that the Portland Games were, “great as usual.  Jim and Donna Maxwell really know how to treat the athletes and direct the many other events that were ongoing throughout the day.   It was a very tough competition and the standard of throwing was at its highest.”