It was a big day for the U.S. at the Highland Games World Championships, as Americans filled the podium: Sean Betz won, followed by Larry Brock and Ryan Vierra. 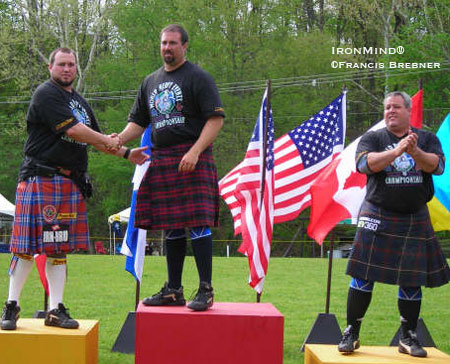 Here is the report filed by Francis Brebner:

America took top honors at this year's World Highland Games Championships (which were held in Bridgeport, Virginia), as Sean Betz triumphed over the five-time world champion Ryan Vierra, who was gunning for his sixth title—which would have put him in the history books with the most wins.

Overall, it was a great competition with fantastic distances thrown in all events.

Points were, overall, Betz in first place with 19 points; Larry Brock in second, with 24 points; and Ryan Vierra in third, with 26 points.

Asking Betz how he felt after winning the World Championships, he said, "I feel great. I knew I had to place in the top three in every event, which I did. It just came all together for me . . . I am so happy."