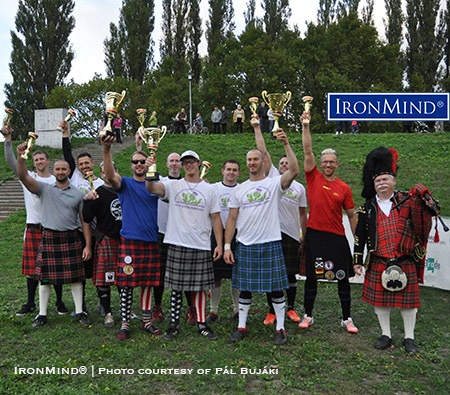 In the heavy weight for distance, Odden was a favorite to clinch the win but had serious competition from Farr from the very first round, which ended with Farr claiming the victory by a whisker at 43’ 11-3/4” to Odden’s second-place 43’ 11-1/2”. Sansotta took third at 37’ 5-3/4”.

In the 28-lb. weight for distance, the slug fest continued between Farr and Odden, with Farr pulling out a world-class throw of 75’ 5” for another win. Second was Odden with 73’ 3/4” and third, Sansotta at 66”.

Farr was now in a comfortable position with three wins out of four and with his better events in the hammers to come, but he would have to face Dawkins, the world record holder in both 16-lb. and 22-lb. hammers.

The weight-over-bar came down to a tie between Farr, Odden and Sansotta, all clearing at 16’ 4” to share some valuable points going into the last event with the caber.

Adam Darazs, CEO of the IHGF, said the entire championships were filmed for TV in Europe. He is looking to expand the IHGF Highland Games Championships and Stones of Strength events in Hungary and also to neighboring countries in Europe, noting, “This is very exciting times we have planned for the future of the sport.”