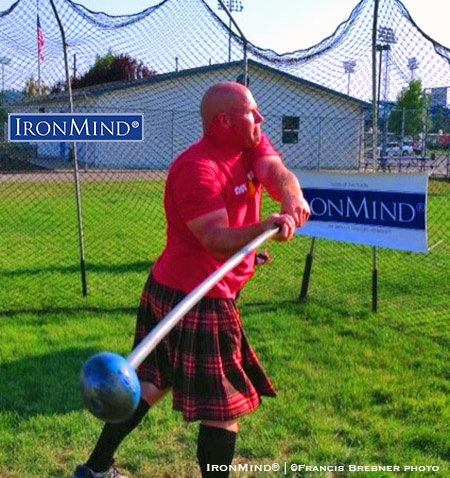 Along with winning the men’s amateur A division at the Spokane Highland Games, Scott Chisholm qualified for the IHGF All-American Highland Games Finals.

The 22-lb. Braemar stone was a ding-dong battle between Scott Chisholm and Alex Jeffrey with Chisholm prevailing with a put of 37’. In a close second was Jeffrey with 36’ 1-1/2”. Third place was Andrew Heaton at 32’ 8”.

Heaton and Jeffrey battled in the 28-lb. light weight-for-distance, with Jeffrey overtaking Heaton on his final attempt with 68’ 5”. Heaton finished second at 66’ 11” and Chisholm trailed in third at 63’ 5”.

The next two events, the heavy and light hammer, were for the IHGF All-American Hammer Throwing Championships. In the 22-lb. hammer, Chisholm, looking smooth and fast in his winds, let rip with a series of throws all over 90’, with a best of 96’ 4” for the win. Second place went to Jeffrey at 86’ 2-1/2” and third to Heaton at 77’ 10”.

In the 16-lb. hammer, Chisholm kept up his winning streak with a distance of 116’ 1” to claim the overall IHGF All-American Hammer Throwing Championships title. Second-place Jeffrey threw 107’ 4”, followed by Heaton at 96’ 11”.

The 20-lb. sheaf was a battle between Heaton and Cook, reaching a height of 24’ with Heaton taking the win with fewer misses. Cook was second at 24’ on countback and Chisholm third at 20’.

Asking Scott Chisholm about his overall performance in qualifying for the IHGF All-American Highland Games Championships, Chisholm said, “I’m pretty excited. I can’t wait for McPherson. I missed it last year so I’m happy to come back this year.”

A special mention to Sean Pelfrey and his team for their incredible work in putting together a memorable games and making it so enjoyable for all the athletes from start to finish, with exceptional hospitality to all.