Busan, Korea - On paper, it looked like the men's 77-kg category at the Junior World Weightlifting Championships would come down to a battle between Lu Changliang (China) and Taner Sagir (Turkey), and it did. 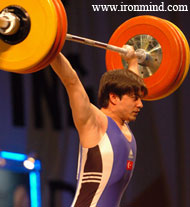 Taner Sagir had to chase this 161-kg snatch a bit to hang onto to it, but in the end, he seemed ready to lift whatever he needed to sweep the gold medals at the Junior World Weightlifting Championships. IronMind® | Randall J. Strossen, Ph.D. photo.

And if you just looked at the final results, you'd think the battle was close, but it wasn't - Sagir seemed ready to lift whatever he needed to win all three gold medals, and that's just what he did.

Lu snatched 152 for his opener and Sagir did 156 for his first attempt. Lu made another good lift with 158, and Sagir followed with an easy 160. Not folding, Lu then made 161 on his third attempt, and Sagir, being the lighter man, went into the lead when he made the same weight - easily enough, but he had to chase the barbell a bit to hang onto the lift.

Lu opened with 182 in the clean and jerk, for a good lift, and then made another nice lift with 189. Sagir then took 190, which he made very easily, and when Chu missed the jerk on 196, Sagir called it a night. Mikalai Charniak (Belarus) got the bronze medal in the total via 151/182.