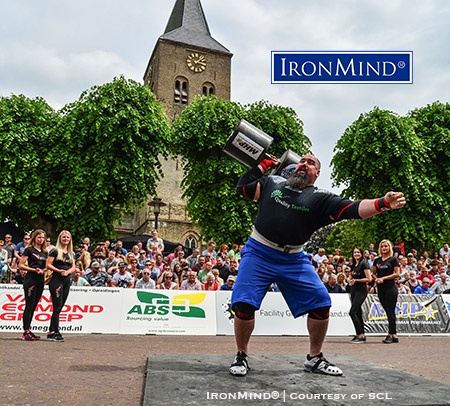 Eric Dawson (USA) will be defending his title this weekend at SCL Holland. IronMind® | Courtesy of SCL

The MLO Strongman Champions League (SCL) Holland is big on talent, with a field that includes guys over 2 meters tall, and watch for a new twist in the competition format.

On June 17 at 1 p.m (13.00) Lichtenvoorde, Holland is ready to welcome 14 top professional strongman competitors for SCL Holland, including Sean Hagan (212 cm tall) and Mika Tora (207 cm tall), who will be making his SCL debut.

“This is the fourth of 16 SCL stages and there will be pressure on Graham Hicks to maintain his coveted leader’s shirt,” SCL co-founder Marcel Mostert told IronMind.

Mostert and his partner, Ilkka Kinnunen, who have 25 years of experience in strongman, are introducing a new concept, a fresh format, featuring elimination rounds and team events. Mostert explains:

“After the third, fourth and fifth rounds, the bottom two athletes will be eliminated, and after the third round, we will do a drawing of the 12 athletes still in the contest at that point to make 6 teams.

“This brings elements of drama/good luck and bad luck/cooperation, as well, between rivals.

"In the fourth round we will do team events, which makes it all the more interesting, and after that we will do the last 2 events again as individuals.

“This will make for a more exciting competition, with nothing predictable like the top three always are in some strongman contests,” Mostert said. “It is time to change the elements in this sport and SCL Holland is ready to rock!”