The grand finale of the 2014 SCITEC European Strongest Team Challenge took place at the Arnold European in Madrid, with Team Poland capturing the victory. 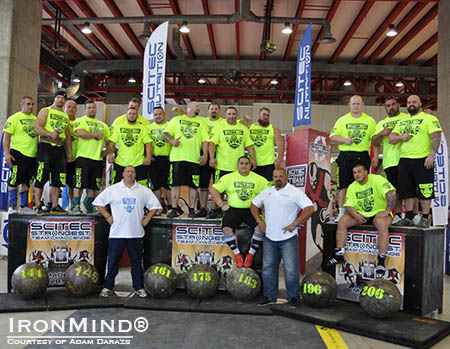 Here's the lineup for the 2014 SCITEC European Strongest Team Challenge held at the Arnold in Madrid. Photo courtesy of Adam Darazs

The final of the SCITEC Strongest Team Challenge all came to a head at the Arnold European Classic Madrid, where over 40,000 spectators enjoyed the sporting festivities over the three days.

The teams competing were as follows:

First event got off to a great start with the two-man 18 ton truck pull with harness; the teams had 60 seconds to compete the pull over the course of 19 meters.  For team Czech this was a sweet victory with a rapid time of 17.13 seconds; for second place it was very close indeed between team Ukraine and team Poland, with team Ukraine just nudging out the second place victory by a whisker with a time of 18.22 seconds.  Third place was team Poland:18.29 seconds.

The next event was the log lift for reps and teams had to lift overhead a log weighing 250 kg for as many reps possible in 75 seconds.  This time it was team Poland that rose to the occasion and they took the win with a total of eight reps and this set a new series record also. Sweden followed in second place with seven reps, and team Czech was in third place with six reps.

The second event was the two man frame carry, which weighed a total of 1220 lb.  had to be carried over a course of 40 meters.  Teams had 60 seconds to compete the course in the fastest time possible. Team Poland ripped through this event in a time of 16.98 seconds; second place was team Czech with 21.75 seconds, third team Ukraine  24.31 seconds.

Moving onto the Icelandic cross, which weighed a total 140 kg and had to be picked up and lifted by team member A and carried for max distance, this was a walk in the park for Ukraine’s Sergei Konyushok, the two-time winner of the lightweight strongman world championships, as he made a distance of 40 meters. Second place was Poland’s  Rafal Kobylarz at 28.98 meters, and third was Austria’s Michael Votter  at 25.90 meters.

Team member B that took to the next challenge, with the deadlift for reps:335 kg with a 60-second time limit. Poland’s Mateusz Baron the former 2011 amateur strongman world champion dominated this event with a colossal 10 reps in under 32 seconds.  Second place was Spain’s Carlos Dematey with 4 reps, and third place was a tie between Sweden’s  David Dematey and Czech’s  Radek Patak with 3 reps each.

-
Asking Adam Darazs about the overall competition, Darazs said, “This was a great competition—the atmosphere at the event was electrifying, the athletes put up a great battle from start to finish and the fans cheered them on throughout the entire competition.

“It has been a great season for the SCITEC European Strongest Team Challenge and I could not think of a better way to end it but at the Arnold Classic Europe festival. We are already working on the new 2015 season, with the first stage in the series planned to take place in Moscow, Red Square, and major championships IHGF events planned also for the 2015 season as well.”