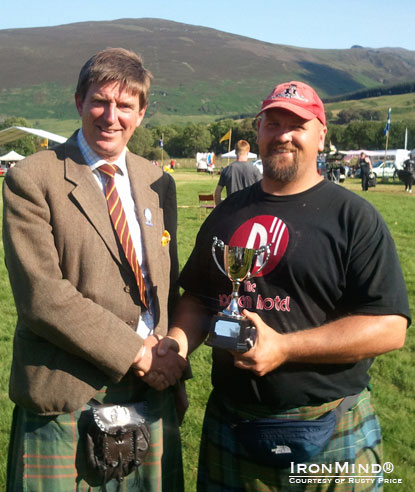 This weekend a major Highland Games competition took place in the picturesque setting of Lochearnhead, Scotland, which hosted the SHGA British Highland Games Championships, drawing a crowd of nearly three thousand spectators on a glorious, sunny day of competition.
The event included the gathering of the clans MacGregor, MacLaren and Stewart of Strathern, and over one hundred clan members took part in the march behind the magnificent local pipe band through Lochearnhead to the Games field.

A total of eight heavies took part in the competition, including USAs Mike Pockoski and Rusty Price, and Scotland’s Craig Sinclair and Stuart Anderson, and young bloods of the sport Grant Sinclair (22), Lorne Colthart (21), and Dale Walker (21), along with German athlete Martin Tim Kuhne (21).   This young pool of talent is a sure sign that there is no need to worry about a lack of Scottish heavy athletes for the future in Scotland.

The 56-lb. weight-for-distance saw big numbers thrown all around, but Price rocked the field with a gigantic throw of 52’ 5” for the win.  Pockoski was second with 49’ 5”, C. Sinclair third at 48 ’6”, and Anderson fourth at 44’ 1”.  It was later reported that the weight was actually several pounds underweight.

In the 16-lb. hammer, sparks were flying between three athletes, with Mike Pockoski, the current IHGF world hammer throwing champion, pulling out a superb throw of 145’ for the win and a personal best.  In second was Price with a noble effort of 139 ’10”; in third came C. Sinclair at 137’ 1”, and in fourth Colthart with 126’ 1”.

Going into the last two events, it was very close in points between Price and Pockoski, with Price only one point ahead.  The caber toss, with a caber weighing 145 lb. and 19’ long, ended in a tie, with both athletes producing 12:00 tosses. In third place was C. Sinclair with a 1:00 toss.

The final event, the 56-lb. weight-over-bar, was to be the decider between the American duo for the overall prize.  Price, Pockoski and C. Sinclair went all out, with it once again coming down to a tie at a height of 15’ between Price and Pockoski; and Price winning the overall by one point.  In third place was C. Sinclair with a height of 14’, and in fourth place were Colthart and Anderson at 13’.

Asking Price how he felt about adding the national title of the British Highland Games Championships to a rapidly growing list, he said, “Mike and Craig pushed me all the way and it could have gone either way.  There is something about competing on Scottish soil that brings out the best in an athlete.  My throwing seems to be improving from Games to Games, and I’m setting several personal bests.  I just love it here in Scotland.  The crowds here are wonderful and the countryside is breathtaking.