He's the guy who's always been the face of the fearsome No. 3 Captains of Crush® gripper, the first man ever to officially close this worldwide benchmark of grip strength, but he's even more than that now, because Richard Sorin - proving that you can do things right, and that's what is most important - re-certified on the No. 3 Captains of Crush® gripper, making him - at once - the first, the last and the oldest man to accomplish this huge feat of grip strength. 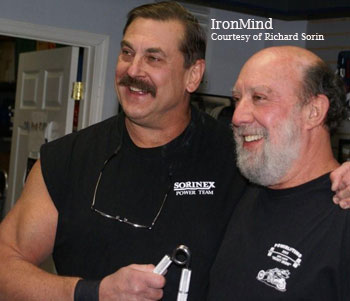 Nobody forced Richard Sorin to do this, it was something he thought up, and for the man who has inspired grip guys worldwide, it was a way for him to show that cutting corners, making excuses, and taking anything less than the high road is not the way to go.

When IronMind® originally certified Richard Sorin, the grip world was small and very close, it enjoyed a strong feeling of camaraderie, and good sportsmanship was the order of the day. As the popularity of grip strength rose, things got more complicated and along the way, for some people, the original spirit of the challenge was replaced by a sense that they were entitled to "close" the fearsome No. 3 Captains of Crush® Gripper by just about any means they could think of - partial movements, cooked grippers, or whatever other shortcut they could come up with, marginalizing the grip world and cheating themselves in the process.

Starting in the early 1990s, when people would call IronMind® asking for inside information on how to close the No. 3, we would admit that there was a secret . . . "You have to squeeze really hard," we would say. And this, of course, required that you be very strong.

Today, Richard Sorin - the guy who always has been and always will be the big dog on grippers - proved that strong hands are just the manifestation of having a greater strength inside. Hats off to Richard Sorin - and always remember that if you're going to do it, do it right!