Hossein Rezazadeh just told IronMind that he will be competing in the upcoming World Weightlifting Championships, and he would be leaving for the Dominican Republic in about six hours. 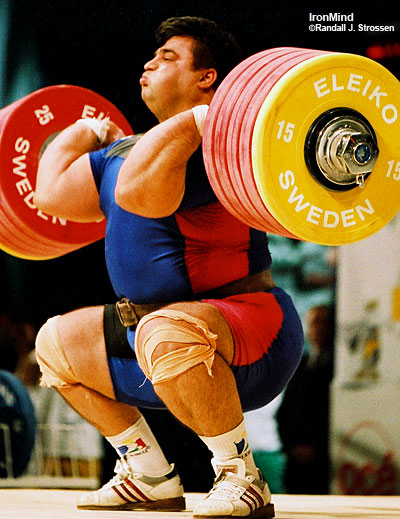 Hossein Rezazadeh hits the bottom with 263 kg, on his way to breaking the world record in the clean and jerk at the 2002 World Weightlifting Championships (Warsaw, Poland). IronMind® | Randall J. Strossen, Ph.D. photo.

Yesterday, the lifting world was rocked as reports flooded out of Iran that the Iranian weightlifting team had multiple positive drug tests.

Kouroush Bagheri, 2001 world champion in the 94-kg category, explained the situation to IronMind®, saying that about two weeks ago, WADA came to a training camp that the Iranian weightlifting team was holding in Tehran, and then two or three days ago, the team received word that of the 11 lifters who were tested, nine were positive. Hossein Rezazadeh and Asghar Ebrahimi were the two who tested negative.

Bagheri said that the team was shocked by the results since it had been getting tested approximately every month by an internal group, and there had not been any problems. The lifters who tested positive and the team as whole face a potential ban if the results are upheld, but Bagheri said that Hossein Rezazadeh had received a letter from IWF President Tamas Ajan personally inviting him to compete in the upcoming World Weightlifting Championships - at that point, it was not yet certain whether or not Rezazadeh would be going to the Dominican Republic for this competition.

Then, speaking directly with Hossein Rezazadeh, IronMind® received confirmation that the two-time Olympic champion would be competing, and he would be leaving for the airport shortly.