The 2014 MHP Strongman Champions League season is in full swing and this past weekend, the action was in Latvia—where Rafal Kobyaz won. 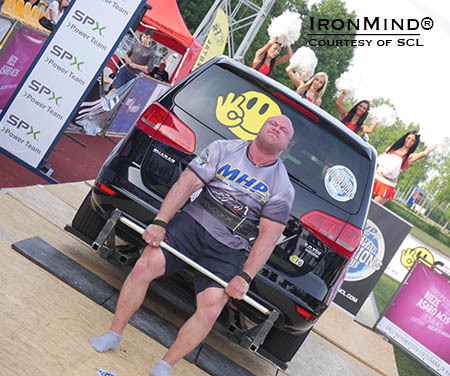 Dainis Zageris repping out with the 380-kg deadlift, the final event at SCL Latvia.  IronMind® | Photo courtesy of SCL


Staged in Olaines, about 25 km from Lativa, SCL director Ilkka Kinnunen said the weather was beautiful (25 C and sunny), perfect for the crowd of about 2000 that had gathered to watch the event which featured what Kinnenen called “6 very hard disciplines.”

“Weight For Height started the competition,” Kinnunen said. “There were two athletes who were fighting at the end. Austrian Martin Wildauer took the first place with success hight of 5.40m and Rafal Kobyaz was second.

“The next event Viking Press for reps, with165kg. Lithuanian Vidas Blekaitis did an easy12 reps to win the event.  Three athletes were tied for second place with 9 reps.

“Third event: Powerstairs with 6 steps and 225kg, 250kg, 275kg. The winner was Dainis Zageris, who also broke the Latvian record in Powerstairs. The old one was hold by Raimonds Bergmanis.  Rafal Kobyaz was second.

“The Duckwalk with 225kg and Barrel loading was next and Rafal Kobyaz won.

“The fifth event was the Giant Dumbbell: 95kg for reps. This was hard for many athletes. The winner with 5 reps was Vidas Blekaitis and Rafal Kobyaz. Dainis Zageris, with 4 reps, was next.”

Having the Deadlift for reps with 380kg as the final event “pushed the athletes for a limit of their power,” said Kinnunen. “Lot of no lifts was taking place, but strong deadlifters like Martin Wildauer and Dainis Zageris had successful lifts of 5 reps and Vidas Blekaitis and Rafal Kobyaz 4 reps.

“Once again, MHP SCL Thanks the Latvian organizer and their sponsors for a great competition. Next weekend the MHP SCL continues in Faro, Portugal, so stay tuned!”