He came into the Athens Olympics a three-time gold medalist in weightlifting, and when he was done competing, medaling yet again, he took off his lifting shoes, signaling his retirement, and then he received a standing ovation the likes of which has never been seen before in the world of sports - minute after minute rolled by as the modern day Greek hero received a fitting tribute. 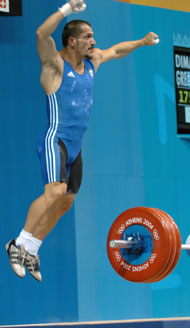 Pyrros Dimas (Greece) celebrates his successful 175-kg snatch at the 2004 Olympics, where he won the bronze medal - a very nice addition to the gold medals he had won in each of the previous three Olympics. IronMind® | Randall J. Strossen, Ph.D. photo.

Asked what he's doing now, Pyrros said, "I still feel so tired that I don't do any training at all for weightlifting. On the contrary, I do what I always liked to do but I wasn't allowed to because of weightlifting and that is football (soccer)! I train and play every week."

Pyrros said that he is also relishing spending time with his family, and while he isn't lifting any more, he remains actively involved in the sport.