Maybe you didn't read the June issue of MILO®, but no matter, because now you know why we put him on the cover and told you what he just might do this year: Phil Pfister came through like a trooper and he did it - he won the 2006 MET-Rx World's Strongest Man contest and now, guess who is going to be on the David Letterman Show? 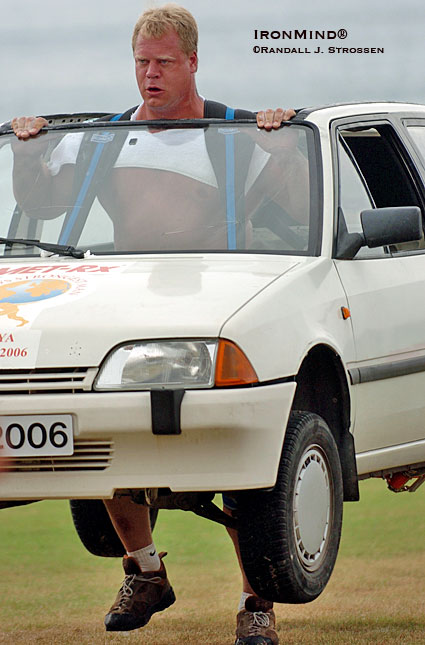 He won the Car Walk, along with a total of five of the seven events in finals of the 2006 MET-Rx World's Strongest Man contest, not to mention the overall title, and tomorrow night 2006 WSM winner Phil Pfister will be flipping a car on the David Letterman Show. IronMind® | Randall J. Strossen, Ph.D. photo.

Phil's going to be flipping a car on tomorrow's David Letterman Show: October 5 at 11:30 p.m. Eastern Standard Time, so be sure to tune in for it. Phil might also be on Live with Regis on Friday morning, October 6, and we have a feeling that this is just the beginning for Mr. Pfister.