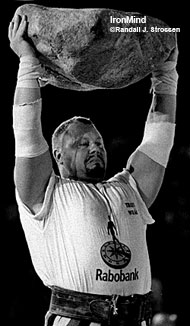 He said it was to round out the field, but we couldn't help but wonder if Magnus Ver Magnusson, who promoted these contests, joined the action just to show that even if he only trains once or twice a week, he's still no slouch when it comes to strongman. The four-time World's Strongest Man winner finished second overall in the East Coast Giant contest, and he won three events - one of which was the overhead stone lift. "It's my favorite overhead lift," he said, and it's an event that he has won in major strongman contests when he was in his prime as a competitor.