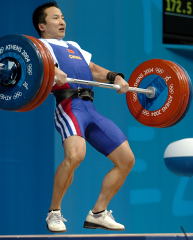 "We are deeply honored to welcome Coach Chen Wenbin and Athens gold medalists Shi Zhiyong and Zhang Guozheng to the 2005 Arnold Expo, and without the complete and immediate support of Jim Lorimer and Governor Schwarzenegger, this would never have been possible. This is a great day for the sport of weightlifting and is a first step toward the 2008 Olympics," Strossen said.

With special thanks to the Megan Tornstrom, Mark Cannella, and Dan Bell for getting weightlifting on the program at the Arnold Expo, everyone lucky enough to be in Columbus, Ohio next March 4-6 for the 2005 Arnold Expo will be able to see two of the world's best weightlifters—Olympic champions Shi Zhiyong and Zhang Guozheng.