The multi-talented Ingrid Marcum is headed to Calgary, Alberta (Canada) today, “for push training and testing,” as part of her bid to make the 2010 USA Olympic Bobsled Team. 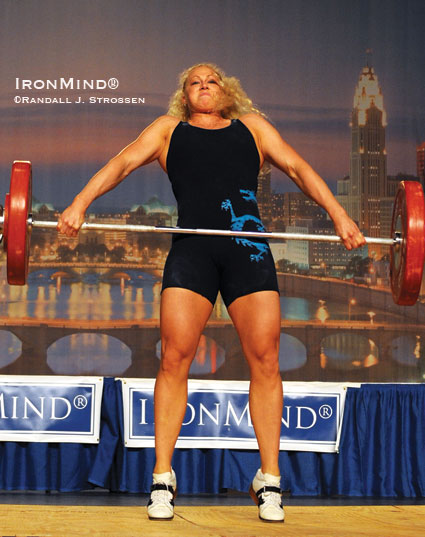 Ingrid Marcum lifted at the IronMind® Invitational at the 2009 Arnold - this photo of her is included in the October issue of Iron Man magazine.  IronMind® | Randall J. Strossen photo.


Ingrid Marcum played a key role in the IronMind® Invitational that brought the German Men’s Olympic Weightlifting Team - featuring Olympic gold medalist Matthias Steiner - to the main stage of the Expo Hall at the Arnold Sports Festival earlier this year.  As a dramatic counterpoint to the German men, Ms. Marcum helped make the show that counted California Governor Arnold Schwarzenegger among its spectators.

In June, Ms. Marcum won the USA Weightlifting National Championships in the 75-kg class and later that month she also began working with John Brookfield on a training video featuring his Battling Ropes training system.

“I have really enjoyed working with John, and filming the DVD this summer, and have incorporated the ropes into my own training!” Ms. Marcum told IronMind®.

John Brookfield told IronMind® that in the same way that he created new training systems for developing grip strength, he developed his Battling Ropes program as a way to enhance strength-endurance with an entirely new approach to training.

Called Hurricane Ingrid: The Workout, John Brookfield says that in this DVD you will “see Ingrid demonstrate the different training concepts of the Battling Ropes system.  From there she will show the viewer how to put these different concepts into a variety of workouts that will greatly benefit any athlete and take their strength and conditioning to the next level and beyond.”

Calling her “a complete champion in every way,” John Brookfield said that he is “very happy and honored to work with Ingrid Marcum.”

Back to weightlifting, this past weekend was the USA Weightlifting Secondary Qualifier for the team going to the 2009 World Weightlifting Championships - Ingrid said that she’d “love to be out there competing, [but] I had too much going on with the bobsled.”