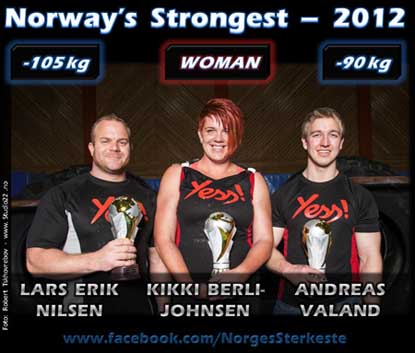 Broadening the traditional strongman base to include women as well as a 90-kg and a 105-kg class for men, the 2012 edition of Norway’s Strongest Man was a big hit.  Here are the winners (left to right): Lars Erik Nilsen, Kikki Berli-Johnsen and Andreas Valand.  IronMind® |  Robert Tskhovrebov photo.

“It was the seventh year in a row that these national championship have been held, but the first that we also arranged Norway's Strongest Woman,” Lier said.

Lars Erik Nilsen won the -105 kg class, with performances that included deadlifting 220 kg for 15 reps within the one-minute time limit.  Bjørnar Kvernstuen was second and Jon Einar Hauglan was third.

44-year young Kikki Berli-Johnsen edged out Renate Loraas by one-half point to win the women’s class and Janne Grandalen-Flo was third.  By virtue of her win, Berli-Johnsen earned an invitation tho the United Strongmen Women’s World Championships.
###