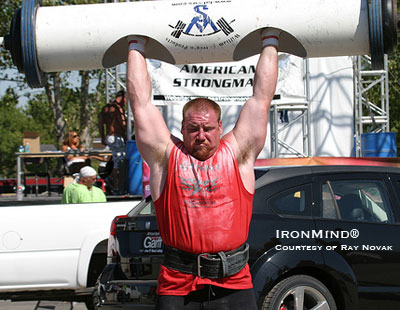 
Dione Wessels, along with her husband, Willie, have been running NAS for about eight years, and in that time, the membership has grown from about 240 to about 4,000, Wessels said, with about 14 contests being held in the year that she and her husband took the helm.

Speaking of the NAS Amateur Nationals, Wessels said, "We tried a different format this year. Instead of a one-day contest, and with hopes of preparing the athletes for more than a one-day show, we did eight events over the course of two days. Five events were held at the Timpanogos Harley Davidson's in Linden, Utah on Saturday, and the remaining three were held at the Utah State Fair in Salt Lake City, Utah. The hosts this year were Van and Jenie Hatfield. The contest went great, and the new pro athletes are David Hansen of North Carolina and John Schuna (105-kg winner) of Wisconsin."

Asked about the role of a pro card in strongman, Wessels told IronMind® that it helps ensure that the athletes "are truly ready to compete at higher level and are less susceptible to get injured or just slow down the contest," and she sees its value increasing as the number of strongman competitors increases. And growth is what Wessels sees for strongman, as she said she would like to "greater unification in the sport. Splintering like powerlifting would be the death of the sport."