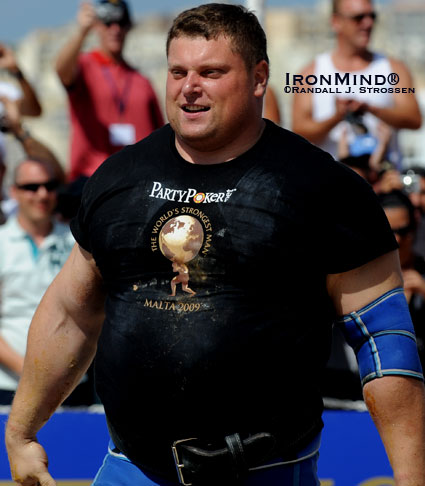 Zydrunas Savickas is a strongman who keeps his lip buttoned and lets his performances speak for themselves.  But don’t think quiet means docile:  This photo was taken seconds after Zydrunas realized he had won the 2009 World’s Strongest Man contest and there are teeth in that look.  IronMind® | Randall J. Strossen photo.


Yesterday, when Zydrunas Savickas told IronMind that he had launched his World’s Strongest Man (WSM) training that day and that “honeymoon will be after WSM,” it seemed like perfect timing to ask if the strongman who combines little talk with big results if he would take some questions on several key points.  Zydrunas kindly obliged us.

Setting the stage, strongman can be a game of wits and wile as well as strength and speed, so we had a concern about what Zydrunas could feel he might comment on without giving away any secrets to his competitors.  Not to worry, though, because Zydrunas told IronMind®, “I do not have any secrets.  I just train hard.”

Talk about being in character:  While some strongman competitors seem to put more energy into developing and presenting their on-stage personas, coming across as more sizzle than steak, Zydrunas Savickas quietly chugs away.  It’s kind of like when the flashy-looking sports car breaks down and sits by the side of the road while an unassuming yet unstoppable tractor passes it by.

The final product in sports is spectacularly physical, but the psychological component provides the underpinnings, something that might be forgotten when your subject is an imposing figure weighing more than twice an average man and whose strength is roughly equal to that of a handful of average men.  Yet, when asked what advice he would give a young boy who saw strongman on TV and decided he wanted to be a strongman when he grew up, the first thing Zydrunas said was, “You can be the strongest.  You must believe.”

Focus is a big thing in all forms of competitive activity and when you talk sports, the competitive landscape is shaped primarily by your fellow athletes.  So, IronMind asked Zydrunas, “Last year, everyone expected the World's Strongest Man contest to come down to a battle between you and Mariusz [Pudzianowski].  This year, who will be your main rival(s)?”

“I think it will be between me, Misha, Brian, Derek, and Travis,” Zydrunas said, referring to Mikhail Koklyaev, Brian Shaw, Derek Poundstone, and Travis Ortmayer, respectively.  That’s quite a talent-laden short list and IronMind® would bet that all on it are going to be flattered that Zyrdunas Savickas mentioned them as top prospects for the WSM 2010 title.

When Jamie Reeves first introduced me to Zydrunas Savickas, he explained that Zydrunas was a 400-kg IPF squatter, a matter of no mean distinction, so it was natural to ask Zydrunas whether he missed powerlifting competition.

“I miss powerlifting competition, but it’s too hard to compete [at the] same time in strongman and powerlifting contests.  I not compete in powerlifting [in] 5 years, but I will come back for a few contests for sure.”

For the past month or so, a hot thread on the IronMind® Forum has been The Future of Strongman, with 32 pages of posts and nearly 9,000 views.  One of the dominant questions has been whether or not strongman needs a single, unified federation in order to advance, and while there have been numerous posts from leading names in multiple facets of strongman, there has been a noted shortage of comments from the top active competitors themselves.

Zydrunas Savickas not only is the current World’s Strongest Man winner, but he’s also the owner of buckets of strongman records, is a recognized king of shoulder and back strength - two key components in any reasonable assessment of strength - and is the only man in the world to have won World’s Strongest Man, the Arnold strongman contest, Fortissimus, and the IFSA world championships.  So with his credentials, just what does Zydrunas Savickas think of this weighty question?

“For sure, strongman must have one strong federation.  It’s only one way to go forward,” Zydrunas said. 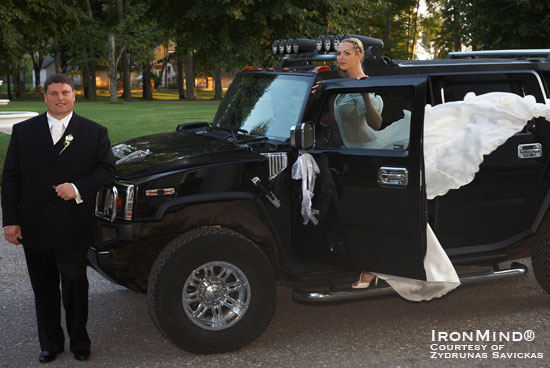 Zydrunas Savickas and his bride Jurgita make a Hummer look particularly good:  Zydrunas Savickas won a few Hummers at the Arnold strongman contest, but when he sent IronMind® this photo yesterday with the caption “ wedding car :) ” we had to ask if this was one of them.  “I sold all Hummers,” Zydrunas said.  “I just used my friend’s Hummer for wedding.”  IronMind® | Photo courtesy of Zydrunas Savickas.