Since the Strongman Champions League World Log Lift Championships was a live broadcast, everything "had to be on a tight schedule, by the minute," Marcel Mostert told IronMind®, "something that the athletes normally are not used too." 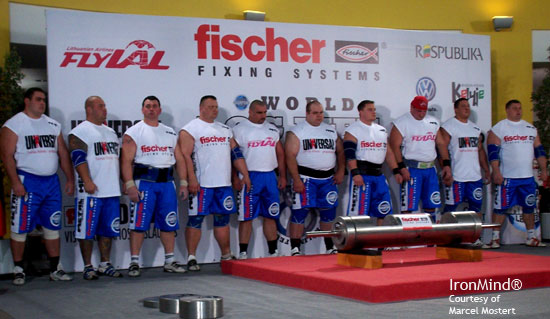 The Strongman Champions League gave strongman a new twist this past weekend with the live broadcast of its World Log Lift Championships. Here's the lineup of competitors. IronMind® | Photo courtesy of Marcel Mostert.

In another departure from tradition, "Each lift was refereed by three referees like in weightlifting," Mostert explained. The referees were Strongman Champions League founders Ilkka Kinnunen and Marcel Mostert, and Latvian weighlifting star Victors Scerbatihs, who won the bronze medal in the super heavyweight class at the recent Beijing Olympics.

"Oleksandr Pekanov, the Ukrainian strongman, had a personal best of 190 kg coming into this competition, but he missed three times his opener of 180 kg, and had no result in the end, so he was very disappointed about that. Sebastian Wenta (Poland) was very happy with his result - new PR [personal record] in competition, and was also the only one who had three good lifts: 180, 190 and 195 kg. The other Ukranian, Oleksandr Lashyn, did get his best result ever with 195 kg. He missed this one on the second attempt, but finally succeeded on the third attempt and he was happy like a little child when he gets his birthday present," said Mostert.

"Newcomer Kryzstof Radzikowski (Poland) and Ervin Katona (Serbia) did an impressive 180 kg, which was also the national record for Serbia, set by Katona. Misha Kokylaev (Russia) did an impressive 195 kg, and he just missed the 200 on his third attempt. This was a big relief for Zydrunas, as he already did 200 kg on his second lift, so he could go for the world record. Although he missed a world record of 212.5 kg, just by a few inches to lock out, he was very happy that his easy 200 kg was enough for a win; because it was in his home country, Zydrunas Savickas needed to win.

"We are all happy with the result," Mostert said. "It was a very nice contest and we will do it next year again, with hopefully a new world record then!"

Here are the top six places: