Mike Jenkins is letting his actions speak for themselves as he stages a frontal assault on strongman and yesterday he boosted his stock price once again by winning the prestigious Arnold Strongman contest. 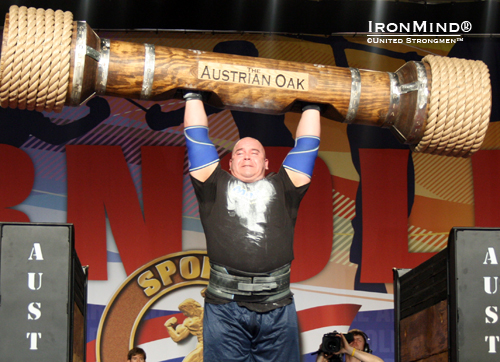 New for the 2012 Arnold Strongman contest was the Austrian Oak—a log press from stands.  IronMind® | Courtesy of United Strongmen™.


United Strongmen’s Jyrki Rantanen followed the action and told IronMind, “It appears that Brian  [Shaw] had a severe biceps injury, but he´ll go under some further examinations soon.

“Mike [Jenkins] was on fire during the whole competition—only the deadlift was his Achilles heel, but he managed to get enough points from there to edge out the whole comp.  Mike also was one out of two, along with Big Z, to get the 207-kg Austrian Oak up (Mike did 2 reps, Zydrunas did 1 rep).

“Zydrunas was 2.5 points in the lead before the last event (400-kg Timber Carry to uphill), but proved his mortality in it, when dropping to overall third place behind Mike and Derek Poundstone after the event.

“To be noted, Big Z earned his lead, when we hauled up a new world record for the Hummer Tire Deadlift with 1117 lbs." 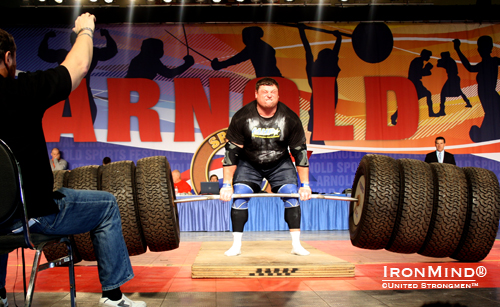 Zydrunas Savickas broke the world record on the Hummer Deadlift with a huge pull of 1117 lb.  IronMind® | Courtesy of United Strongmen™.